Skip to content
“The cure for anything is saltwater, sweat, tears or the SEA.”- Isak Dinesen.  CALL Captain Joe for details and reservations! 1-401-623-1121 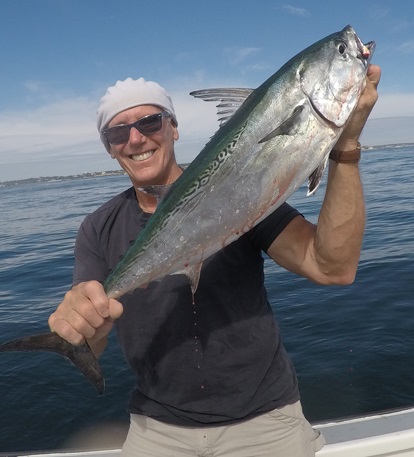 Captain Joseph Rl. Aiello was born and bred into a life of fishing and knows the ins and outs of the waters like no one else. He is fully licensed as a Coast Guard accredited captain in the 100 Ton Masters Class, with a lifetime of experience equal to no other. He is also certified by the American Red Cross in First Aid and CPR.

Joe has been fishing off the waters of New England (especially off the coast of Newport) for 43 years, both as a commercial fisherman and private charter captain. He began his working life on the water in 1976 trap fishing. Since then he has worked on: in-shore and off-shore lobster boats, as a codfisherman, and as a charter captain. With a unique and professional approach, he enjoys bringing the thrill and excitement of inshore and offshore fishing to as many newcomers and seasoned veterans alike. Working with his daughter Coral is a dream come true for him and he fully admits he “doesn’t like to leave the dock without her.”

Joe and Sara Star Charters have been featured in multiple magazines and publications. A few include: “Men’s Journal” and “On The Water” magazines, as well as the 1998 Sperry Top Sider calendar, and 2000 Men’s Journal  Magazine. RI Monthly Magazine has featured Sara Star Charters on three separate occasions in 2004, 2006, and most recently in February 2016 as one of the top Newport summer destinations.

47” from the other day. Tagged using @grayfishta

Hard to keep up with all these posts sometimes! He

It’s been non stop! So many stripers and so many

Can’t beat it, some photo op fish and some for d

It just doesn’t stop! Another killer day on the

What a Father’s Day. Let’s just start by sayin

Two great trips today, despite all the wind